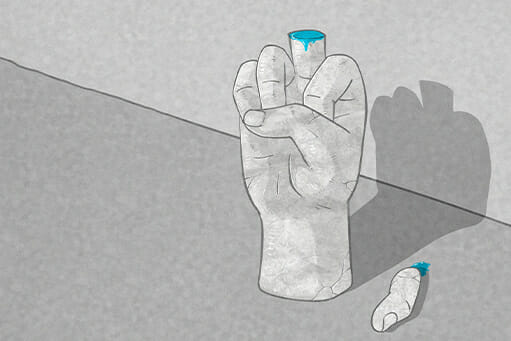 Cynicism vs Stoicism: Are They the Same or Wildly Different?

In fact, Peter Sloterdijk has suggested that some of the people we now call Stoics gave Diogenes shelter at one point because his rejection of comfort was too extreme for his own good.

To learn more about Cynicism in relationship to Stoicism, you’ll discover a quick analysis of both.

It’s not as simple as Stoicism vs Cynicism, as you’ll see. But if there is any overlap, it really comes down to the key points that Stoicism borrowed from Cynicism.

Ironically, I think it’s fair to say that Cynicism would have rejected Stoicism outright, including everything it borrowed from Diogenes and other Cynics.

So if you’re ready to find out why, let’s dive in!

At its core, Cynicism is a philosophical and practical attempt to be free. In fact, it makes freedom an extraordinarily high virtue. Diogenes of Sinope, from whom we get Cynicism, reportedly put it this way:

It is divine not to need anything and semi-divine to only need a little. Quoted in Sloterdijk’s Critique of Cynical Reason.)

This statement reflects a consistent theme throughout Cynicism: It rejects everything, including the notion that Cynicism is a philosophical system.

That notion too must be rejected because theorization is addictive. Having an “idea” or notion that is “correct,” especially when it is yours, is the same as having a possession. It builds your ego and reliance on external things.

It would also link the philosophy of Cynicism to the larger “superstructure” that governs other philosophies that claim to “love” knowledge.

No, Cynicism says that the ultimate wisdom is not having a theory at all. Rather, you need to accept life as a risk each and every moment and live it to the fullest.

You do this not by doing what anyone says, but working things out on your own in terms through interpretation. Typically, you wind up with a philosophy of radical negation. You not only negate your desire for power, for example, but you also negate the power of desire itself.

In this way, Cynicism is a lot like practices and philosophies like Advaita Vedanta, certain kinds of Buddhism and Zen.

In this way, there is no Cynicism vs. Nihilism. Nihilism ultimately suggests that life is meaningless, but the true Cynic would reject even that because demonstrating such a thing would require a system. It would also require the use of meaning to demonstrate the absence of meaning, quickly collapsing in upon itself.

Emil Cioran is often mistaken as a nihilist, but he often wrote aphorisms that are much more Cynical in nature. For example, in The Trouble with Being Born, we find:

Firsthand thinkers meditate upon things; the others upon problems. We must live face to face with being, and not with the mind.

Basically, Cioran is attempting to not need anything in the sense of divine that Diogenes meant. There’s nothing nihilist about that.

Stoicism, on the other hand, definitely does not reject systematic thinking. In fact, the Stoic virtues tend to be highly systematic.

Unlike Cynicism, Stoicism is grounded upon logic. It uses language as if language itself were logical.

Stoics like Marcus Aurelius thought that the world is unified. Although differences appear, they all ultimately belong to an overarching oneness. As Nietzsche quipped about this belief throughout his works, the problem with Stoicism is that it believes in god, it believes in time and above all, it believes that there are Stoics.

Sloterdijk takes this sentiment even further. He says that Stoicism is a philosophy of comfort. And this criticism makes sense. It is not at all critical or antagonistic to the reigning culture and its values. Rather, it was typically written by and then followed by those best off in society.

Thus, Stoicism is like a set of mental tools that help you deal with the wounds created by a repressive social system. Cynicism rejects the system altogether.

This difference does not mean that the Cynic sought out poverty. It’s just a radical ridding of false pretenses that restrict your mental and physical freedom as you navigate your way throughout the world.

The successful Cynic theoretically has no need for anything other than freedom. A story about Diogenes illustrates this concept.

One day, Alexander the Great came to visit him. He offered to grant Diogenes his biggest wish. Instead of asking for anything material, he simply asked Alexander to step aside because he was blocking the sun. Alexander responded by saying that if he were not Alexander the Great, he would want to be Diogenes.

If Diogenes were a Stoic, he would have dealt with his irritation quite differently. He would have thought through the various virtues to find a “systematic” way to deal with Alexander’s offer.

But Diogenes went straight to the point. He knew that wanting or accepting anything would blemish his access to the truth of the Now, represented by the sun. So without any philosophizing or theorizing, he simply asked Alexander to get out of the way.

As I’ve suggested, Nihilism isn’t really possible because to demonstrate that there is no meaning, you have to use the tools of meaning. I mentioned Cioran above and Eugene Thacker is another person associated with Nihilism who actually writes tremendously meaningful (and entertaining) books about the problems of knowledge, purpose and pessimism.

The reason some people might think Cynicism shares something with Nihilism is this:

Cynicism shows that philosophy is a rigged game. It uses language and this automatically requires participation in a system.

Worse, philosophers are often Idealists. They propose states of being that are better than what we currently have. Their dreaming-out-loud often leads them to tell us how we should live when they themselves are rarely capable of upholding such ideals.

In fact, they are never capable of upholding them and the Cynics were disliked because they pointed this failure out.

Diogenes and others like him wrote and acted on their philosophy more than anything else. They taught by demonstrating, not teaching, and this puts us in the role of interpreter. It’s very close to Zen in this regard, and that is notoriously difficult for a lot of people to wrap their minds around.

Yet, Diogenes’ general style is still with us today. Nietzsche remains one of the most popular philosophers and people like Derrida and Zizek play with language and performativity in ways that reveal the cracks in the “system.”

But the fact that philosophers with a cynical edge reveal the hypocrisy of the Idealists in no way makes them nihilists.

If anything, Cynics show us a more direct path to meaning. Another story illustrates this point:

Diogenes was once asked for the name of his home village. “I am a citizen of the world!” he proclaimed, exposing the fabricated nature of the idea of a “country.”

Nietzsche perhaps had this point in mind when he refused to consider himself a German and cast a wider net with his concept of the “Good European.”

Stoicism And Cynicism Are Useful Relics

At the end of the day, both Stoicism and Cynicism are useful collections of ideas. But ultimately, they are relics of history that reveal genres or flavors of thinking.

If Cynicism has an edge over Stoicism, it’s simple to express:

Cynicism ultimately preferred to reveal how things work through demonstration rather than rhetoric or even discussion. That’s why the story of Diogenes asking Alexander to get out of the way of the sun has stood the test of time. Rejecting the genie in the bottle about to grant any wish says it all regarding how much Diogenes valued his freedom and the present moment.

Cynicism simply disregards how the world works and hardly bothers to dispute it. Stoicism, on the other hand, is a philosophy of action and reaction based on rationality. It comes packed with tools that help you deal with the disappointments participating in the systems of the world are bound to create.

Both are great to study, and if nothing else, remember that Stoicism is ultimately affirmative of society by helping you cope with what Freud called the discontents of civilization. Cynicism sees all of society as a superstructure that convinces you to have needs and then uses the illusions to control you.

When society is successful, the ways of the world separate you from your sense of Inner Time and your ability to be fully present in the Now.

Keep that in mind the next time you see a popular book on Stoicism in the bookstore or being flogged online. It might be just the bandaid you need, but a true Cynic might just be bothered enough to point out that it’s actually your path into yet another prison.