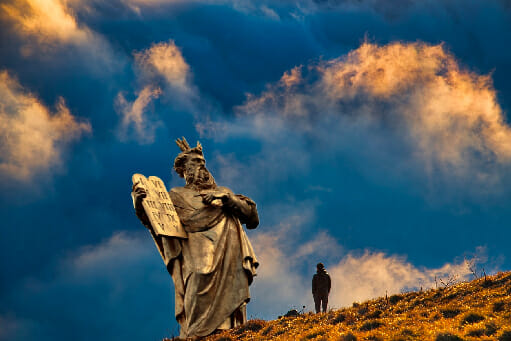 The 4 Stoic Virtues: Should You Apply Them?

This might surprise you, but there’s nothing particularly “stoic” about the four major Stoic virtues.

Many cultures, systems of belief and philosophies feature them.

But if one thing sets the Stoic approach apart, it’s the “all-in” attitude they brought to the game.

That’s because the Stoics stressed homologoumenē. This word refers to consistency as a personal characteristic.

And if you don’t bring consistency to the virtues you practice, then it really doesn’t matter how many of them you think you have.

So if you’re interested in learning about virtue tout-court (all encompassing virtue), on this page you’ll learn about these key virtues.

And even better, you’ll learn about how to be consistent with them. Or at least one of them, the most likely one for us mere mortals as all four help along the way.

There’s another special characteristic specific to the Stoics.

They’re amongst the first group of philosophers to start focusing on rationality as having a virtue of its own.

More than that, they thought that rationality creates other kinds of virtues. Values too.

But the most important aspect of all was that you weren’t a dabbler. You were intended to take on rationality and develop it for the rest of your life.

And this is one of the main weaknesses of Stoicism.

But before we get into that topic, let’s talk about what the four virtues are. They basically boil down to virtues that shape your life, particularly your ethics. They are:

Knowing what to do, how to do it and when is a key virtue because the laws that govern reality constantly force us to act. This is a point stressed by Gary Weber in his excellent book, Happiness Beyond Thought.

Subtypes of practical wisdom include:

How do the Stoics suggest you get good at these things?

As Epictetus suggests in his Enchiridion, wisdom creates freedom only when:

He goes even further by suggesting that you are not wise if you attach your well-being to property, popularity or even luck.

Another way of thinking about this is the Buddha’s famous proclamation that expectation is the quickest path to suffering.

Or, as Bruce Lee put it, no ego, no enemy. I think of this variation because relying on other people and things for your happiness is bound to grow your ego. And that means growing your expectation, which is sure to create suffering. Usually sooner than later.

Some people say that temperance boils down to moderation.

Although that’s true, Stoicism has the problem of focusing too much on the individual. Others who have examined Stoicism find that temperance is vastly influenced by collective decisions, so much so it is difficult for any individual person to fully align with this virtue.

Basically, this is a fancy way of saying “we are the sum of the five closest people in our lives.” If you want to improve in life, you need to surround yourself with people who are both practicing self-betterment and already better than you.

You can select your peers by looking at the subtypes of temperance. They include:

When you find people who display these virtues, you’ll rapidly find yourself falling into alignment with them through modeling and the natural activities of your mirror neurons.

Aristotle’s The Nicomachean Ethics gives an excellent way to think about courage:

It is the “golden mean” between reckless bravo and cowardice.

Subtypes of Courage include:

Courage is one of the hardest virtues to practice because it’s hard to tell exactly what you’re up to in the heat of the moment.

For example, I was recently teaching one of my memory improvement live sessions when a student straight up lied in front of the group.

I knew I had to confront this even though it was going to be uncomfortable. I found myself doing so publicly.

I’m still of two minds whether or not this was the right decision, but the reality is that it just happened. Although it’s possible to say that publicly accusing this student of lying took courage, the way I meticulously demonstrated that he had lied and explained why it was wrong bordered on recklessness.

I certainly wasn’t a coward, and you can’t say that I wasn’t drawing upon courage. But I do think I went too far, and can only speculate on the nature of free will, as I do in my book, The Victorious Mind.

Justice has to do with two things:

Knowing how to do this comes down to study, practice and reflection on your experiences.

To accumulate experience as quickly as possible, focus on developing the subtypes of justice as a Stoic virtue. These include:

Of all the Stoic values, blameless companionship will be the hardest. After all, who doesn’t make a mistake? And if you’re going to practice this virtue, don’t you sometimes have to hold others responsible?

This is yet another contradiction in the Stoic system that people wishing to practice the stoic virtues need to work through.

Perhaps with consistency, you can find solutions that work for you. Personally, I find it impossible to reconcile and as some scholars have pointed out, Stoicism’s logical virtues are based on language.

This fact means that Stoicism is ultimately self-referential and often in violation of the law of non-contradiction.

Perhaps this issue is not a problem for you, but I feel that it reveals how and why consistency with the four Stoic virtues is impossible.

I’m not the only one who has found an issue with the justice virtue in Stoicism. St. Augustine thought Stoicism failed precisely on the point of justice because it did not include any form of eschatology.

Although many in the modern world aren’t convinced that hell exists, and people like Christopher Hitchens thought such a place hardly meted out anything even remotely like “justice,” Augustine may have been intuiting the importance of certain mental metaphors.

If there is no punishment other than what we dole out to others, Stoicism may be less effective than it could be.

That said, it’s not clear that all Stoics lack eschatology. Marcus Aurelius makes more than a few comments about God, the gods and the heavens in his Meditations. Although his talk focuses a lot on how gods help humans, the implication is that not having their aid is a kind of punishment.

Nearly all of this aspect of Aurelius’ writing is illogical and inconsistent. But he doesn’t always miss the mark.

An area where Stoicism is much more consistent has to do with the body.

For example, they are inherently realistic about your physical state. You will age, aging comes with suffering, and everyone dies.

You can learn to be consistent about:

A key point to consider is that if you pay attention to all of the four virtues of Stoicism, you’ll have much more free time and mental space to focus on physical care.

Although it’s not particularly sexy, when he points out that people are twisted and driven half-mad by their drive to essentially rub their membranes together, they fail to observe the nature of their minds.

And that means less time focused on the four main virtues and other ways of taking physical care of yourself.

Are The Four Stoic Virtues Worth Practicing?

In a word, yes. If you’re realistic about them.

And as I’ve pointed out, there are some logical inconsistencies with them.

Furthermore, some of them can only be thought about after the fact. It is important to reflect frequently on what you’ve done in the past so that you might act better in the future.

Plus, you might encounter times when such virtues need to be dropped altogether.

For example, there may be times when it’s totally acceptable to drop courage altogether. Fleeing from some dangerous situations doesn’t necessarily make you a coward. Nor are you necessarily reckless if you wind up stepping on some toes when you feel called to amp your courage up a notch.

Ultimately, virtues are ideals and humans can only aspire to them.

That may or may not be a good thing and only you can decide.

I know I’ve made my decision and I am certainly not a Stoic. Far from it.

As mentioned above, there’s nothing particularly stoic about these virtues and my preference is for how they appear in Advaita Vedanta.

But I’m not a strict disciplinarian of that system either.

In fact, I’m not particularly interested in practicing the systems of other thinkers and schools at all. I’m interested in building them, even if that means drawing on all that has come before.

At least as much of it as I can get my hands on.